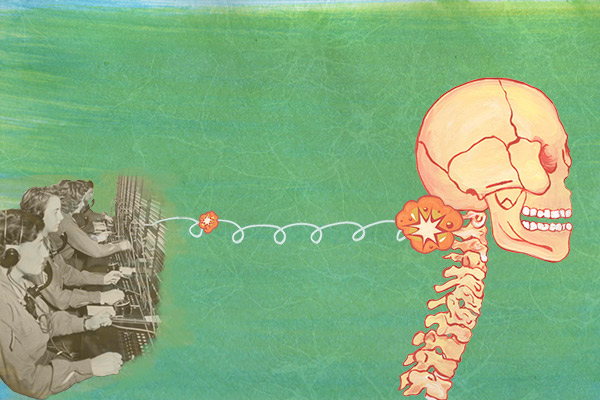 Researchers led by Mark Zylka, PhD, also found a compound that could become a new treatment for conditions such as arthritis, shingles, and back pain.

CHAPEL HILL, N.C. – Researchers at the UNC School of Medicine have found a new target for treating chronic pain: an enzyme called PIP5K1C. In a paper published today in the journal Neuron, a team of researchers led by Mark Zylka, PhD, Associate Professor of Cell Biology and Physiology, shows that PIP5K1C controls the activity of cellular receptors that signal pain.

By reducing the level of the enzyme, researchers showed that the levels of a crucial lipid called PIP2 in pain-sensing neurons is also lessened, thus decreasing pain.

They also found a compound that could dampen the activity of PIP5K1C. This compound, currently named UNC3230, could lead to a new kind of pain reliever for the more than 100 million people who suffer from chronic pain in the United States alone.

In particular, the researchers showed that the compound might be able to significantly reduce inflammatory pain, such as arthritis, as well as neuropathic pain – damage to nerve fibers. The latter is common in conditions such as shingles, back pain, or when bodily extremities become numb due to side effects of chemotherapy or diseases such as diabetes.

The creation of such bodily pain might seem simple, but at the cellular level it’s quite complex. When we’re injured, a diverse mixture of chemicals is released, and these chemicals cause pain by acting on an equally diverse group of receptors on the surface of pain-sensing neurons.

“A big problem in our field is that it is impractical to block each of these receptors with a mixture of drugs,” said Zylka, the senior author of the Neuron article and member of the UNC Neuroscience Center. “So we looked for commonalities – things that each of these receptors need in order to send a signal.” Zylka’s team found that the lipid PIP2 (phosphatidylinositol 4,5-bisphosphate) was one of these commonalities.

“So the question became: how do we alter PIP2 levels in the neurons that sense pain?” Zylka said. “If we could lower the level of PIP2, we could get these receptors to signal less effectively. Then, in theory, we could reduce pain.”

Many different kinases can generate PIP2 in the body.  Brittany Wright, a graduate student in Zylka’s lab, found that the PIP5K1C kinase was expressed at the highest level in sensory neurons compared to other related kinases. Then the researchers used a mouse model to show that PIP5K1C was responsible for generating at least half of all PIP2 in these neurons.

“That told us that a 50 percent reduction in the levels of PIP5K1C was sufficient to reduce PIP2 levels in the tissue we were interested in – where pain-sensing neurons are located” Zylka said. “That’s what we wanted to do – block signaling at this first relay in the pain pathway.”

Once Zylka and colleagues realized that they could reduce PIP2 in sensory neurons by targeting PIP5K1C, they teamed up with Stephen Frye, PhD, the Director of the Center for Integrative Chemical Biology and Drug Discovery at the UNC Eshelman School of Pharmacy.

They screened about 5,000 small molecules to identify compounds that might block PIP5K1C. There were a number of hits, but UNC3230 was the strongest. It turned out that Zylka, Frye, and their team members had come upon a drug candidate. They realized that the chemical structure of UNC3230 could be manipulated to potentially turn it into an even better inhibitor of PIP5K1C. Experiments to do so are now underway at UNC.

Funding for this study was provided by the National Institute of Neurological Disorders and Stroke.